Research Review: History of Emotion Theory – What is an Emotion?

The Sharon Faye Foundation’s mandate is to conduct world class research into emotion – testing the hypothesis that learning to feel intense emotion is essential to improve how our society functions, and to disseminate the results of this research so that people can learn how to feel again.

We have identified six Research Pillars to represent the infrastructure of our societal systems and which inform our cultural experience, beginning with the birth of an individual, through to the governing body of a nation: Identity (our sense of self and purpose), Family, Education, Business, Law, and Politics.

In acknowledging society’s multiple systems, the Foundation similarly approaches research from a multisystem or multidisciplinary perspective, including psychology, neurology, biology, physiology, and sociology.

In this article, Daphne Simoens, Sharon Faye Foundation Research Associate, summarises the findings of her review into the history of emotion, exploring theories within the discipline of psychology. By exploring the history of emotion, we create a framework to map Sharon Faye’s original concept, Emotional Strength[i], relative to existing theories.

Daphne shares an overview of her findings below.

“Passion”.  “Appetite”. “Sentiment”. “Accidents of the soul”. “Disturbance”. These were the words used until the term “emotion” was introduced into the English language in the early 1800s.

“What is an Emotion?” was first proposed by philosopher and psychologist, William James in 1884. James famously asserted that an emotion exists when there are physiological changes in our visceral (autonomic) system such as sweating, increases and decreases in heart rate, muscle contractions, blushing or turning pale, and more[ii]. He also identified physiological changes that are more obvious including facial expressions (e.g., a frown) and the outward expression of an emotion (e.g., crying).

One year after James’ question, Danish physiologist, Carl Lange came to a similar conclusion. However, Lange expanded on James’ theory by proposing that physiological changes are not limited to the visceral system and facial expressions, they extend to the vasomotor system which regulates blood pressure[iv].

It is unclear if James agreed with Lange here, but both appear to agree on this: we do not experience fear because we see a snake (the stimulating object), instead we experience fear because our heart beats faster and our hands tremble (the physiological changes involved in running away from the snake – which is the emotion). Both proposed that different patterns of physiological changes comprise different emotions, and their view became known as the James-Lange theory of emotion.

Is the James-Lange theory a convincing conclusion to understanding emotion? Not according to theorists Walter Cannon and Phillip Bard.

In 1927, Cannon and Bard challenged the sequencing of an emotion as first proposed by James. They argued that physiological changes in our visceral system by itself could not explain the experience of an emotion. According to Cannon and Bard, similar  physiological changes can bring about different emotions (e.g., in anxiety and anger) or no emotion at all (e.g., when feeling cold or feverish)[v].

The Cannon-Bard theory suggested that an emotion exists at the same time and independent of physiological changes, not one causing the other[vi]. Neuroscience supports this theory: when there is a stimulating event or object, the thalamus (the part of the brain responsible for receiving sensory information) sends signals to both the amygdala (the part of the brain responsible for processing intense emotions such as fear and excitement) and the brain’s cortex (responsible for conscious thought) simultaneously. For this reason, the Cannon-Bard theory is often referred to as the thalamic theory of emotion.

From their findings, Schacter and Singer concluded that there are two factors (hence, the two-factor theory of emotion) that make up an emotion: 1) a physiological change, and 2) a situational explanation. They hypothesised that when we are in the presence of the event or object that causes a physiological change, we are susceptible to finding an explanation for this change dependant on the situation we are in and experience the emotion[viii]. This contradicts James who viewed the body as an audience responding to situations, with no allowance for context.

Moving into the 1900s, there was a shift away from James’ theory of emotion as a bodily experience and more towards thought and cognition.

In 1991, Richard Lazarus was one of the first theorists to propose that thinking creates an emotion. According to Lazarus, people think about and appraise the presenting event or object, and then experience the physiological change and emotion at the same time[ix]. 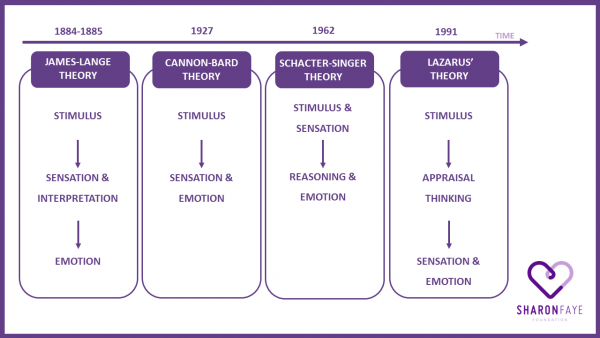 Up until the last decade, Lazarus’ theory of emotion has seemingly been the most accepted view. However, there is currently an increasing interest away from thinking about the stimulating event or object and a return to James: a sense of feeling of the body. Modern critics of James have argued that his question was flawed to start with, and instead he should have asked, “What is a Feeling?” This debate continues today.

Although there are more psychology-centric theories on emotion, these four have largely influenced society’s understanding of emotion to this day and, although contradictory, collectively established the importance of the science of emotions.

As presented above, these theorists have conceived emotion as the sequencing of its parts by viewing the stimulus, and physiological and psychological responses, as separate aspects of emotion. However, this view misses the opportunity to consider ourselves as experiencing emotion in every moment and everyday life, and as a guide toward purpose and meaning.

The Sharon Faye Foundation investigates emotion as whole body engagement and connection to self. We hypothesise that having the capacity to acknowledge and feel emotion is essential for human development.

As a registered charity, we are funded by the generosity of donations. To support our original research program to build Emotional Strength in Education: where classrooms are a place of engaged learning; Business: where people are energised at work and benefit from improved concentration, memory, and productivity; and Families: with parents empowering children to achieve their milestones, please see below or contact us for more information.

“People are so hurt that they have shut down their feelings and become numb as a form of protection from emotional pain and distress. Emotional Strength can help people connect to their deepest pain and feel a sense of competence in being able to feel again. From this point, we can connect to self for the first time. “ – Sharon Faye

Donate to the
Sharon Faye Foundation

Emotional Strength will be known as a theory, a world view, a therapy, and a way of responding to the world.

We promote a move away from tending the “ill” towards a culture of wellness. Neuroscience informs us how each person plays a crucial role in the emotional health and wellbeing of others and that it is never too late to change. When one person gets healthy, it has a ripple effect. By creating a wellness culture, everyone can benefit from the wellbeing of most and thrive in a safe, supportive environment.

Emotional Strength has helped people come out of denial to face themselves and take action to address fundamental issues such as addiction, anxiety and depression, disengagement, self-deception, lack of direction and purpose, poor communication, and burnout. It is essential for people to feel again. Feeling is not suffering. It is the essential foundation of a rich, connected and satisfying life.

Thank you for helping us to help people feel again

100% of your donation funds world-class emotion research for global impact.

Sign up to our quarterly newsletter for the
latest news and research progress.